In 2019, for the first time in Israel, a kindergarten was built inside a nursing home. The project, which was filmed and turned into a reality show, included a group of four year old children who came to the experimental kindergarten for six weeks. Each day, the kids interacted with ten elderly men and women, and participated in a joint activity that lasted several hours. Experts in the fields of education and geriatrics accompanied the project. The experts monitored the changes in the health of the elderly and the development of the children following the joint activity.

One of the adults who participated in the program was Ida Ganz, a 93-year-old Holocaust Survivor. She was born in Poland and fled with her mother and sisters to Siberia during World War II. At the end of the war, after she returned to the city of Lodz and got married, she sailed on a ship to Israel with her husband and opened a small business. Subsequently, their two sons emigrated to the United States, and currently her four grandchildren and her five great-grandchildren all live overseas.

When asked what made her return to kindergarten every day, she said: "I got so much from the kids. Just their hugs, that alone was enough for me. Who hugs me every day? I missed it so much. We went into a kind of trance with the kids and went back to being kids ourselves. They challenged us and instilled in us courage and vigor." Ida expounded further on her experiences and the tremendous value from these interactions: "... suddenly there were no diseases and no problems. Everything moved aside, including my walker. When I heard the children calling me ‘Ida, come see, Ida, come help me,’ it made me feel that I was still worth something, that I had something to give, and that I could receive so much love." Ida recounted the Seder night she celebrated that year with the kindergarten teacher, Gil Schlisser: "His family received me so nicely. I was so happy and my heart was warmed because usually I am alone on holidays, and no matter how hard I try to be strong, it hurts a lot inside."

Schlisser, who educates the children in his kindergarten using the Montessori method, excitedly recounted how Ida and the other adults contributed to the children. "Very soon, the children saw the adults as full partners in their kindergarten. Not grandparents, but rather friends. They knew how to identify their needs, be patient and attentive, and adapt to the different rhythms of the elderly. Connecting with them was just incredible." 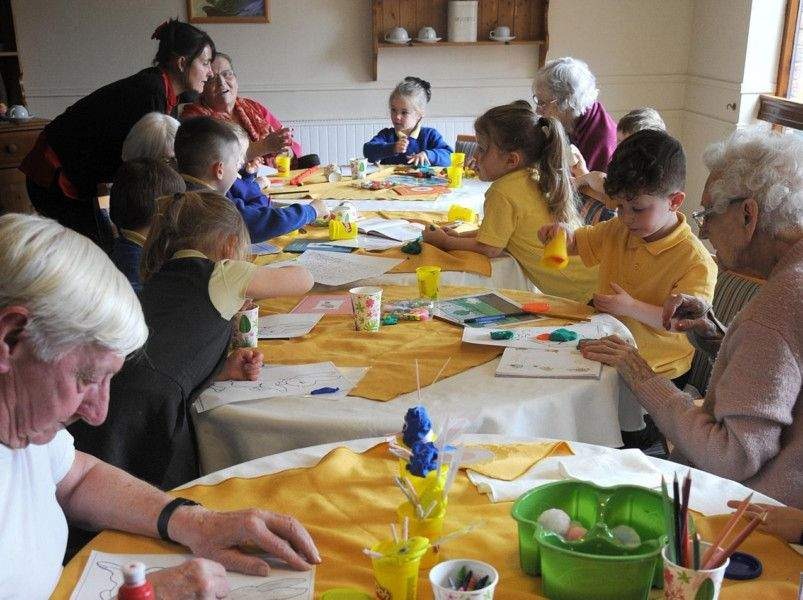 Kindergarten inside a nursing home in the UK (photo by The Gazette).


Peretz Alush, 88-years-old, spoke freely about his experience with the kids. He was born in Gabes, Tunisia, and immigrated to Israel via France in 1948 as a 17-year-old boy. Peretz is multilingual, fluent in Hebrew, English, French, Polish, and Yiddish. Living in the nursing home wasn't always easy for him. "Sometimes, there is a feeling that they [the family] have already said goodbye to you as soon as you enter the nursing home. Although they come to visit you and call, there is still an inner loneliness within the body." Nevertheless, he discovered that the kindergarten had an enormous impact on his mental state.

The benefits of intergenerational integration for both the youth and the elderly have been demonstrated in clinical studies. As Peretz reflected, "There were days when I did not really want to leave the room. I felt sad and depressed… I had a lot of thoughts about the end… Then came this shot of vigor in the form of the wonderful children who entered the kindergarten every morning in leaps and bounds, like songbirds, and brought in so much life and color. When you see them, you immediately throw away all the hard thoughts, get up in the morning, shower, get organized, and go ahead – I have to go to kindergarten. We're playing football today!"

Peretz expounded further on how much he gained from the interaction. "I feel like I've had a real physiological change. Before the children arrived, I was old, tired, waiting for the end – and suddenly, there was a meaning to life. These children lifted my mind and my spirit. I experienced the growth of life. I felt through them like I was born again." Truly, his experience is inspirational and speaks to the potential for educational innovation through intergenerational interaction.