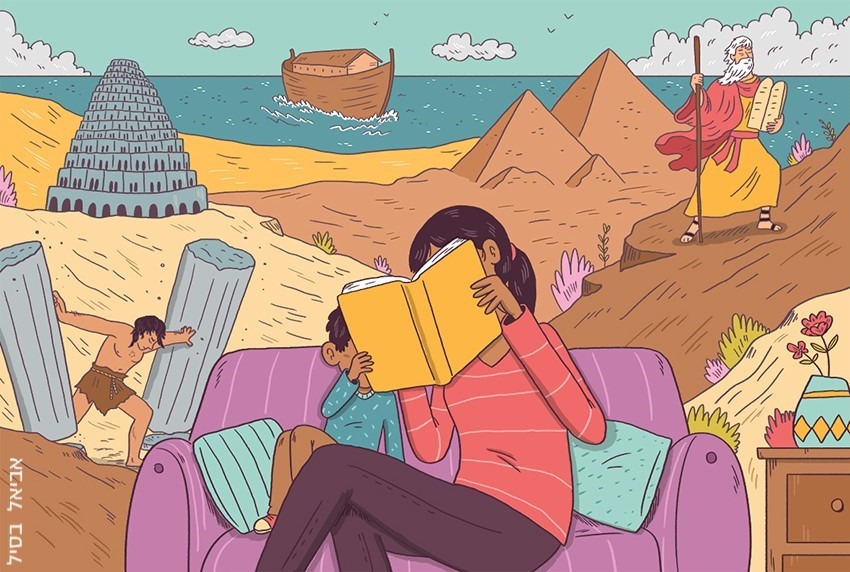 The name of the initiative can be confusing. It's called "929;" but has nothing to do with mathematics or numbers. Instead, it deals with an internationally known text, often praised for being rich, enjoyable, adventurous, touching, and full of striking contradictions. The text contains stories of personal and family journeys, long accounts of fierce hatred and irresistible love, and bloody tales of the rise and fall of empires. It offers cross-cultural myths along with prophecies of rage and tender, graceful poetry. Above all, this famous text - also known as the Bible - is a really great story.

929 Takah B’Yachad (Bible Together) is an Israeli project which promotes the study of a daily chapter of the Bible. Established in 2014 by educational entrepreneur and politician Avi Wortzman, the project's purpose is to serve as a virtual platform for joint, non-religious, all-Israeli study of the Bible.

The idea is very simple. Every day, Sunday through Thursday, all participants cover the same Bible chapter. It makes no difference whether the chapter is short or long, difficult or easy reading, or even if it ends at the climax of a drama - it is only one chapter.

The heart of the 929 Bible Together project is the virtual platform. The discussions on the website include thoughts and ideas offered by cultural, spiritual, and public figures writing freely about the daily chapter. The website is colorful and vibrant, offering not only texts but also occasional poems, cartoons, songs, and podcast episodes produced by various Israeli artists.

About eighty thousand study groups have formed throughout Israel since the establishment of the 929 Bible Together project. Many cultural and educational institutions are participating in the project, including the Israeli Ministry of Education.

The project is named after the number of chapters in the Bible - 929.

The division of the Bible into 929 chapters originated in the late Middle Ages and is attributed to Christian theologian Stephen Langton. This is the conventional division that is most commonly used the world over, including by Jews - alongside the weekly reading of the Torah (Torah passage of the week, known as Parashat Hashavua).

The idea of a set daily study goes back to 1923. At the initiative of Rabbi Meir Shapira of Lublin, Jews worldwide began to study a daily “daf” (double-sided page) of the Babylonian Talmud, such that the entire Talmud is completed in seven and a half years. The last completion (the 13th cycle) was celebrated at the beginning of 2020 by tens of thousands of international participants!

Not everyone is happy with the 929 project. From the outset, religious critics argued that the project excludes rabbinical midrashim and traditional commentators. Others claimed that some of the project's writers refer to God, biblical figures, and the Bible itself in a disparaging manner.

In response, half a year after the project's establishment, Rabbi Benny Lau published a newspaper article comparing the religious critics of the project to the traditional elitist rabbis of the 1st century. Rabbi Lau argued that we should instead follow Hillel the Elder, who maintained that Torah belongs to everyone, and opened the Torah academies to the public. History proved that the act of sharing the Torah with the "ordinary people" led to its widespread acceptance among the nation. It is because of Hillel's policy of inclusion that the Torah lived on in the minds and hearts of hundreds of Jewish generations.

The project's website is also available in English! One of this week’s readings (Exodus 33) offers, among other articles about the daily Bible chapter, the thoughts of Rabbi Lord Jonathan Sacks z"l, former Chief Rabbi of the United Kingdom.