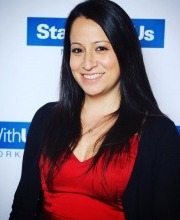 Miri Kornfeld, originally from Denver, Colorado, immediately found her passion for promoting Israel on college campuses when she began attending UCLA. Her involvement in Israel advocacy remained her top priority, and she became the president of Bruins for Israel, UCLA's pro-Israel organization, in her senior year. Upon graduating, Miri joined the StandWithUs team as the Executive Director of High School Affairs in North America. Miri focuses on promoting education about Israel to high school students, providing them with the support and tools they will need to become leaders and Israel advocates on their future college campuses and in their communities.